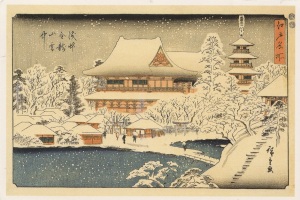 “… the snowstorm began late in the evening as I left R2 Lounge in Roppongi where old friends, creative colleagues and current classmates gathered, celebrated and cross-pollinated in the midst of the Tokyo winter.

It’s been nearly four years since my last trip, and my Fletcher friends from the mid-1990s remarked how astonishing my network had evolved since we last met in 2010, with entertainers and MBA students now among the mix.  Perhaps the coming Spring and future visits will yield a flowering of new perspectives.  MDN”

“You know so many salary men!” my former colleague Sayaka Shiomi said with exaggerated surprise.  She had supported me during the founding of Planet LA Records while we were students in the UCLA Extension program on Entertainment Studies between 2009-2010, and recently moved back to Tokyo to carry on with her career as a music journalist.

Sayaka was referring to my Fletcher alumni friends in dark suits at the Japanese trade and defense ministries, as well as recent MBA colleagues who worked for Japanese insurance and construction companies.  She, on the other hand, was wearing her trademark leopard print skirt which matched her fuzzy purse and seductive name cards.

Earlier in the evening – my Fletcher friends and I exchanged our new and updated business cards at Sushi Zanmai, a fantastic restaurant next to Tsukiji seafood market in the Ginza district.  I would often stay at a hotel in Ginza like I did this past trip just to have sushi for breakfast in Tsukiji, or sometimes observe the record-setting tuna auctions in the early morning hours.

Since we last gathered in 2010 during a Fletcher alumni dinner, most of my Japanese friends had more elevated titles:  Director, Vice President, Head of Unit; and most were still working at the same government ministries and corporations.   My business cards this time were no longer black and white with raised ink as issued by a traditional law firm, but had a unique Planet LA logo as founder of a music entity.  They must have thought I had a serious case of confused identities, and commented on the flexibility for career changes in America compared to Japan’s traditional employment for life.

After dinner at the hip R2 Lounge in the entertainment district of Roppongi – Tokyo’s version of Hollywood or Times Square – the distinct groups from my past and present mingled uncharacteristically but in good fun.   Japanese suits and rebellious rockers, fighter pilots based at the U.S. Embassy, a dash of French and Italian expats, along with a Ukrainian girl who had become a Japanese citizen – found common ground despite bureaucratic rigidity and creative frivolity.

Some of us continued on to a live music venue called Red Shoes in Aoyama until past 3am as the largest snowstorm in a decade hovered over Tokyo (which ended up canceling my flight).  The restless conversations continued on as we ended the evening at one of the city’s all-night, yet elegant watering holes called Bar Deuce — savoring whiskey cocktail nightcaps turned champagne breakfast elixirs until the patient manager politely told us he was closing around 8am.  By then, daylight revealed a vast megalopolis covered in a new snowy coat.  So chill, cleansing and enticing like the evening that would not exhaust itself until dawn.