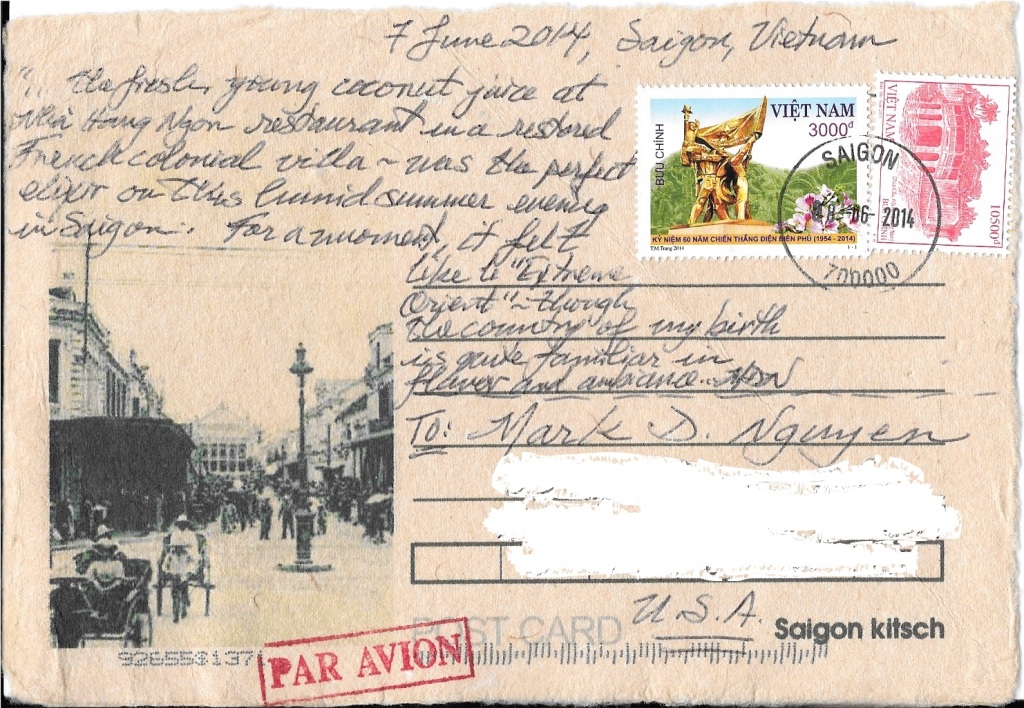 “… The fresh, young coconut juice at Nha Hang Ngon restaurant in a restored French colonial villa – was the perfect elixir on this humid summer evening in Saigon.

For a moment, it felt like le “Extreme Orient” – though the country of my birth is quite familiar in flavor and ambiance. MDN”

Forty years ago today, as the government of South Vietnam fell and the streets of Saigon erupted in panic upon the end of a war — which lasted two decades after the country was divided after the French defeat at the Battle of Dien Bien Phu in 1954 and the ensuing American involvement until 1975 — my mother and I boarded a U.S. military transport plane leaving the place of our birth in Vietnam. My father left shortly afterwards, and we were fortunate to reunite in the United States, which welcomed us as political refugees. We embraced our new homeland… not knowing when we would return.

“Our paths crossed on this day. Your uncle Ky (RIP) flew my family out of VN. I remember it like it was yesterday.” my friend Long said of my uncle Ky upon his recent passing in Seattle. He was a pilot who flew my father and other evacuees out of Vietnam.   My uncle left behind quite a legacy with six children, most of whom have children of their own.

Twenty years later, I returned to visit my relatives as the United States and Vietnam normalized diplomatic relations in 1995. Coincidentally, my supervisor while I was an intern at the State Department in Washington DC became the first Chargés d’affaires and opened up the U.S. representative office which later became the American Embassy in Hanoi.  Over the past two decades, I have been back to Asia and Vietnam on numerous trips for work, study and personal time.

I have been eager to explore my heritage in the “Extreme Orient” – as well as the refined “Old World” in Europe and more exotic corners of the globe from Rio to Riyadh.  These journeys have allowed me to study foreign cultures, conduct cross-border business, and maintain lifelong friendships from my time living abroad in Geneva and Singapore.  On a flight back from Stockholm to Los Angeles this week, Sweden was the 35th country I have visited over the past two decades.

As a toddler whose family left with nothing but a suitcase and determination… each time we journey forth or back to our roots, we have maintained a strong sense of appreciation for every opportunity.   My relatives and I have been privileged to realize the American dream. Our lives have by no means been perfect… careers flourished and floundered, relationships brought happiness and pain, while expectations were raised and unfulfilled. But, American society is both fair and forgiving, allowing one to settle and resettle, succeed and fail, innovate and reinvent.

Looking ahead, the upcoming decades will continue to take me to lands both familiar and distant.  Whether returning to the once-again bustling streets of Saigon, now transforming into a modern metropolis known as Ho Chi Minh City… it is with a renewed perspective on the chaos of the past, gratitude and awareness of the present, and much hope for a promising future ahead.